There is a part of the internet that is known as the dark web or deep web. It cannot be reached through a normal browser and is hidden for most internet users. I’m going to explain you how it works and how to browse the dark web.

Classical secure connections are set up between two endpoints. If you connect to websites like Gmail or Facebook, the connection is encrypted. Anyone listening to your connection will only see gibberish and not the things you do on this website. Only the people at the endpoints, which is yourself and the server you are connected to, can read everything in pain text. This kind of scheme composes a privacy problem. The other side knows who you are and what you do. And don’t forget about the fact that the US government potentially has access to every corporate server in the US.
What we want is 1) an encrypted connection and 2) an anonymous connection.
How can we achieve this?
There are two popular tools that provide true anonymity. TOR and I2P. There are minor differences between those two technologies, but the basic idea behind them is the same.
The network of TOR and I2P is made up with a bunch of nodes. This means that there are servers on the internet who have TOR or I2P software running and participate in the whole network. Now, if you connect with the network, you connect with 1 of the nodes. An encrypted connection is set up between you and that node, the same way you have end-to-end encryption with Facebook or Google. Once you have connected to the first node, you will connect to a second node. The principle is the same. This connection will also be encrypted. Depending on the software that you use, you will connect to 3-6 nodes in total. The last node you connect with is the exit node. From this server you can connect to any server on the internet you want. Every time you send something over the dark web, it will go through multiple nodes and through multiple layers of encryption. The end user will have to decrypt every layer in order to see the cleartext. That’s why this technique is called onion routing.
Assume that 1 of the servers on the network is corrupted. Let’s call it the NSA server. That node doesn’t have any information about you. The entry node (the first node you connect with) knows who you are, but not what you do. The exit node (potentially) knows what you do but not who you are. All the other nodes don’t have any information besides that fact that there is someone on the network.
So, we now have a network on which not a single node knows where you are and what you do. Great. We also know how to connect with the regular internet. But that’s not really what we are interested in. We are interested in the dark web.
It’s possible to run a website on the dark web. It works in a very similar fashion as a regular website. But now the server on which the website runs is connected to a node on the darkweb. This means that a visitor of your site can browse it anonymously. The location of your webserver is also hidden from the public.

How to browse the dark web

As mentioned before, there are two popular tools that have this kind of technology, TOR and I2P. I feel that TOR is easier to set up and to work with, although there is much more future potential in I2P.
Tor can be downloaded from their website. It’s pretty easy to use. Once you downloaded tor, all you have to do is open it.

This opens a seperate Firefox browser. It’s possible that Windows users need to install the software first. If you surf to a normal website, it will use the tor network to reach that service, and exits through an exit node. The website you connect with will see the ip of the exit node, not the ip of your internet connection. The left image is the original ip. The right one is the new ip.

Websites on the tor network itself are only accessible on tor. These addresses have an *.onion domain. Facebook has recently announced to support tor to make their service available in nazi countries that block Facebook. It can be accesses by surfing to https://facebookcorewwwi.onion/ in the tor browser. The result looks like this: 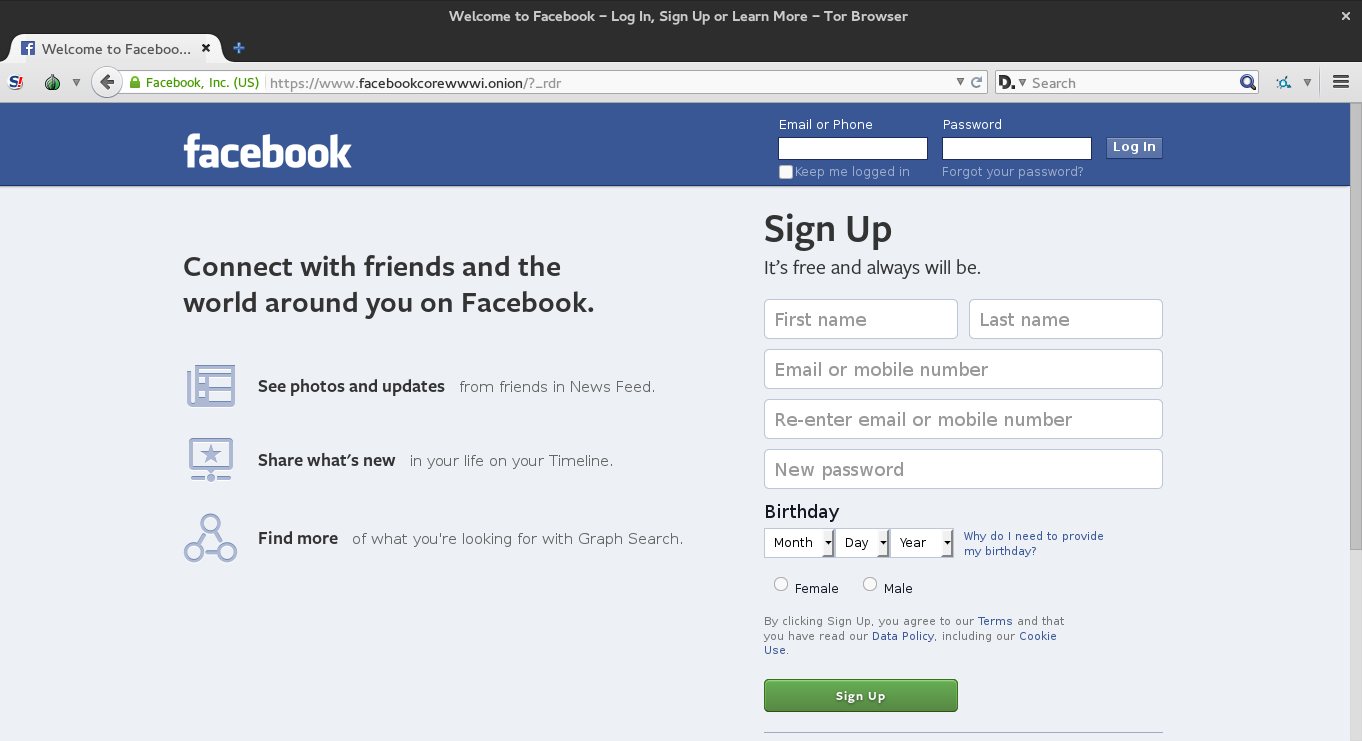 Obviously this is boring, unless you live in a nazi country. There are a bunch of other websites you can visit. Deep.dot.web has made a comparison of so called underground markets. One of them is shown below.

The only thing you need are bitcoins.
Be careful about a lot of these markets. Ever since the Silk Road has been taken down, a lot of new markets emerged. Some of them have a very short livetime and might steal your coins.
Luckily another platform is being developed, called OpenBazaar, on which the market itself is also distributed. This means that a market of any sort cannot be taken down.

I2P is more difficult to set up. I’ll just leave a link here to how to do so. It’s up to you to roam around and discover stuff. The big advantage is that you can just leave it running in the background and use your default webbrowser to go to *.i2p websites. All you have to do is point your browser to use the localhost proxy for these types of ‘websites’. I’ve tried it for a while and there is not much to find. A lot of stuff seems offline. But it’s obviously entirely possible that I didn’t put enough effort in it.
Anyways, the home screen of i2p can be seen below. 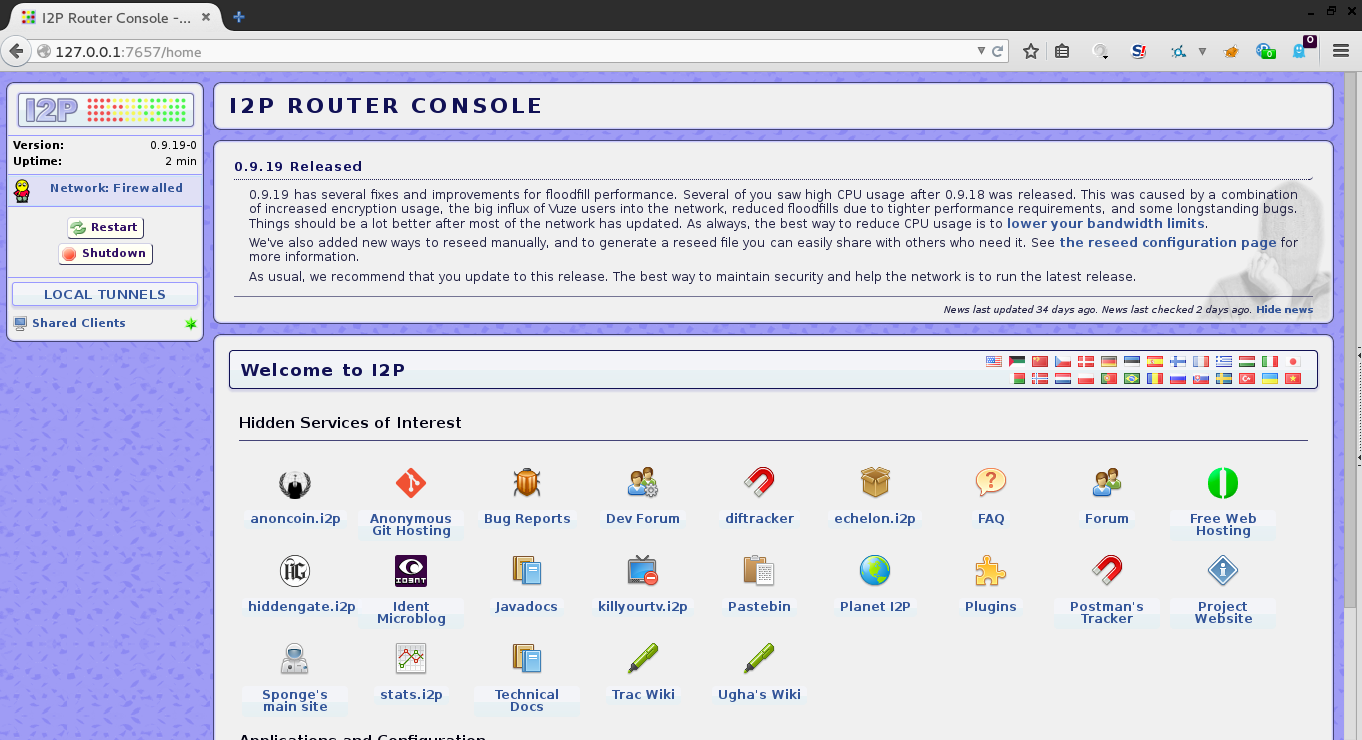