Please note that this post is not intended to provide health advise and should only be used for educational purposes. The following explanation is based on the work of Andrew Cutler, PhD, who is specialiced in the field of heavy metal toxicity. More information about hair testing can be found in Hair Test Interpretation: Finding Hidden Toxicities.

Hair tests are historically used to determine the health status of a patient. It can be used to determine whether certain minerals are depleted or whether there is heavy metal toxicity. The problem with the former is that hair mineral levels might not represent body mineral levels. Either way, we are not really interested in that. What we want to know is how to determine when a hair test points in the direction of heavy metal poisoning.
The most common hair test is the ‘Toxic and Essential Elements’ test. This hair test measures the availability of toxins as well as the different essential elements in a hair sample.
There are a wide range of heavy metals that can be the cause of a certain health condition. The metal that can cause the most problems is mercury. Mercury interferes with the process that is responsible for the regulation of mineral concentration and how your body transports minerals. While other toxins can cause certain mineral transports, mercury causes a ‘general’ impairment. This is what can be called ‘deranged mineral transport’.
The hair test of people who are chronically mercury toxic usually show a mercury level that is within normal ranges. This is because these people have a hard time to get rid of mercury toxicity. Especially people who have detoxification problems will have a normal result for the toxic metals. This is why it can be hard to determine whether someone has mercury poisoning through a hair test.
Because it is hard to determine mercury toxicity based on the concentration of toxic metals in a hair sample, it has to be determined based on the concentrations of the essential elements. Because mercury interferes with the process of mineral transport, the concentrations of the essential elements will look ‘odd’.

The first part of a hair test contains the toxic metals. Because we are talking about toxic metals, there is only an upper bound. If one of the toxins is in the red part of the chart, it may indicate toxicity. The scales that are being used are comparisons with what is seen in the general population. The lab will make a distinction between different sexes and ages. This means that the concentration of a certain element may be higher than the concentration of anther element, but is categorized in a lower percentile. A quotation in the 95th percentile means that this specific element has a concentration in the upper 5% which means that only 1 in 20 people have a similar or higher result. Please notice that this is not a linear scale. The 95th percentile is much wider than the 68th percentile. Next example is a hair test I have done myself in 2014.

As you see, there is nothing special to see. Only Uranium is in the 68th percentile and mercury and lead are somewhat elevated.

Essential and other elements

The second part of a hair test contains essential and other elements. The difference here is that there is also a lower bound. It’s important to notice that the concentration of the elements in hair samples don’t necessarily resemble the concentration of that element in the rest of the body, but it may be an indicator. 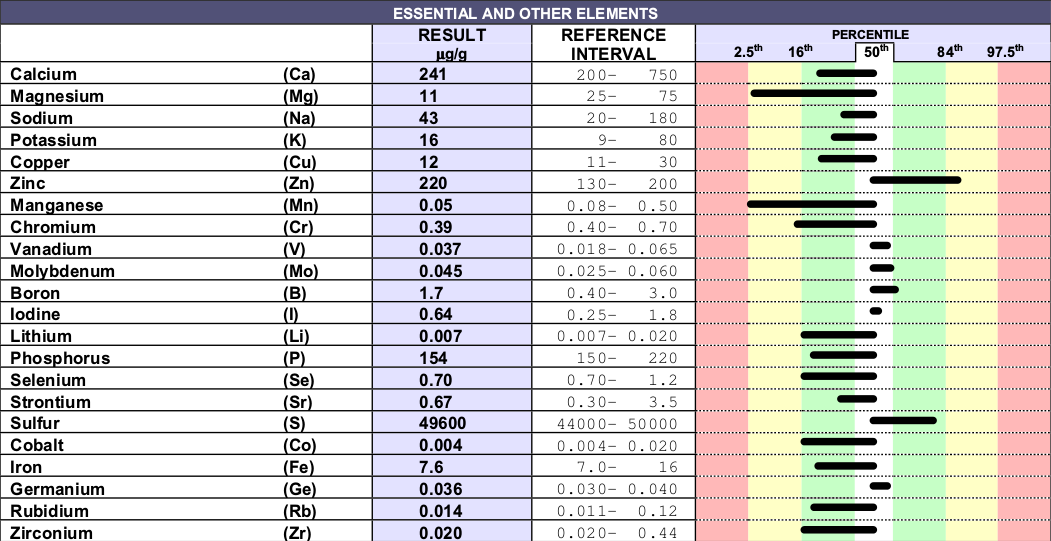 How can one recognize ‘deranged mineral transport’? As mentioned before, the result of each element is compared with the overall population. This means that we can calculate the probability that a certain phenomenon can happen. There are a few phenomena that can happen in a hair test.

All these numbers are based on the fact that there are 23 elements in total, while the hair test we are trying to analyze has 22 elements. A quick lookup teaches us that the probabilities between 23 and 22 elements aren’t much different, which means that these numbers can be used for a hair test with 22 elements. For those interested in the exact numbers for 23 elements, 5 bars or less to one side equal a chance of 0.6%, 4 bars or more in the red equal a chance of 2.6%, 11 bars or less in the middle area equal a chance of 4.5%.
As we see in the example, one can quickly see that the amount of bars in the red (1) and the amount of bars in the middle (14/18, depending on whether you want to include the borderline cases) isn’t going to offer a statistical significant result. The amount of bars to 1 side is interesting. We see 7 bars to the right side which would be ‘unusual’. As you see, 5 of the 7 bars to the right are just slightly to the right, especially iodine. I have been supplementing with molybdenum and iodine in the recent past which may increase the levels of these elements. Because of this we only count 6 bars. This leads to a ‘suspicious’ hair test which has a probability of 2.6% (so it only occurs at random in 1 in 40 people). To represent it graphically: 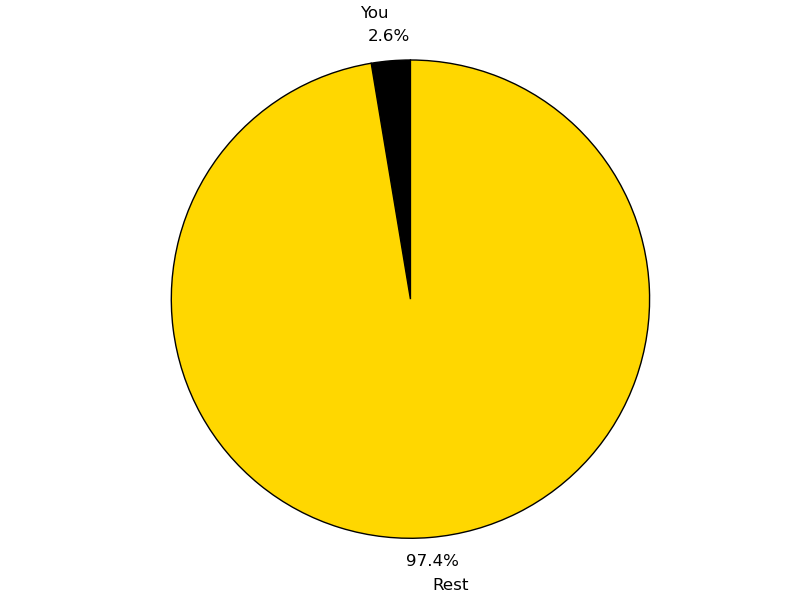 The high levels of zinc may be caused by a zinc displacement by other metals like cadmium, lead, copper and mercury resulting in a paradoxially elevated hair zinc. Zinc hair levels may not be reliable because a lot of shampoos contain zinc.
The numbers that are published by Cutler are based on a hair test with 23 elements. More recent hair tests only include 22 essential elements (barium has been moved to the toxic metal area). Because of this, I’ve written a generic script (doesn’t work anymore) that will calculate the probabilities of your specific hair test.
The results of the hair test we discussed in this post are available here (doesn’t work anymore).
If there is a history of chronic conditions, mercury poisoning would be a very good explanation in this case.
If your test comes up positive, it’s really recommended to read Amalgam Illness, Diagnosis and Treatment by Cutler.